Mysuru: To commemorate the Golden Jubilee celebration of JSS Mahavidyapeetha, the Golden Jubilee Endowment Lecture was instituted. Every year, endowment lectures are being organised by inviting eminent personalities from different walks of life. This year, the Endowment Lecture and Book Release program was held on February 23, 2021, at the JSS College for Women, Saraswatipuram.

Sri. M delivered the Endowment lecture in the presence of His Holiness Jagadguru Sri Shivarathri Deshikendra Mahaswamiji. Sri. M is a spiritual guide, social reformer and educationist who was conferred with the Padmabhushan award. During the event, books authored by Dr. A.S. Kiran Kumar, former ISRO Chairman and Dr. Gita Gopinath, Chief of IMF, were released.

Education is a life-long process that teaches us how to better ourselves: Dr. VN Balaji

Mysuru, Feb. 19, 2021: “Education is a life-long process that teaches us how to improve by ourselves, and guides us to excel in life, despite adversities,” opined Dr. V.N. Balaji, Founder, Jubilant Biosys Limited, Bengaluru.
He was addressing the students at the 13th Graduates’ Day program held at the JSS College of Arts, Commerce and Science, Ooty Road, Mysuru. In his address, he appreciated the efforts of Suttur Math, in providing education to all at an affordable price. He lauded the efforts of JSS College which is striving hard to make the students imbibe the required skills necessary for employability. On the occasion, he advised the new graduates not to be depressed by failures and to keep moving forward.
He briefed about the global standards of education wherein India stands in the third position, just behind China and the USA. “To improve ourselves there is no need to look beyond, but you have to collaborate within the institution. Some agencies give acceleration to novel ideas at the regional level, and we have to collaborate with them,” he added.
A total number of 970 students including 497 undergraduates and 473 postgraduates were given certificates. 62 toppers were honored with endowments and certificates.
Dr. C.G. Betsurmath, Executive Secretary, JSS Mahavidyapeetha administered the oath to graduates. Prof. BV Sambashivaiah, Chief Executive of the college welcomed the gathering. Dr. HC Honnappa, Principal, proposed a vote of thanks. Dr. R. Suhas compeered the program. Dr. B. Prabhuswamy, Controller of Examinations was present. II year B.Sc. student Ms. Sannidi rendered an invocation.

Mysuru, Feb. 17, 2021: “Dr. M. Mahadevappa is a person with a concern for farmers and he has developed several schemes for farmers to lead a self-dependent life,” said Paramapujya Jagadguru Sri Shivarathri Deshikendra Mahaswamiji.

In his blessings, the Paramapujya Swamiji said, “Mahadevappa has invented several varieties of paddy and is known as ‘Paddy Mahadevappa’ among the farming community in the State. He has also earned Padmashri and Padmabhushana awards for his meritorious service. He is active even at this age and sets an example for the youth. His book shows his concern and love he has towards agriculture and farmers,” he said and congratulated him for getting the Lifetime Achievement award from the Karnataka Science and Technology Academy.

Presiding over the program renowned scholar and All India Sharana Sahitya Parishat Honorary Advisor Go.Ru. Chennabasappa mentioned that if Kuvempu is the ‘Rushikavi’, Mahadevappa is a ‘Krishikavi’.

Dr. S. Rajendraprasad, Vice-Chancellor, Agriculture University, Bengaluru released the book. In his address, he said that Mahadevappa is also known for his good administration and has done several valuable and memorable works when he was working as the Vice-Chancellor of Dharwad Agriculture University. “He has also gained popularity among the people by writing many books,” he added.

Prof. Maleyuru Guruswamy gave a brief introduction to the book. “Mahadevappa has dedicated his book to the farmers which is special. The 69 long poems that he has written in the book are an example of his affection and concern towards farmers. Born as a farmer’s son, his service as an agricultural scientist and contribution to agriculture and the benefit of farmers is special and immense. He has not just remained as an agricultural scientist, he is also a good administrator and also has gained popularity as a good litterateur. He didn’t develop an ego despite his massive achievements, he wasn’t corrupt in his life. His enthusiasm and interest in paddy research have still not decreased. He is so active even today that he makes the youth feel shy,” he said.

Dr. M. Mahadevappa and his wife Smt. Sudha Mahadevappa was felicitated by JSS Mahavidyapeetha on this occasion.

Mysuru, Feb. 17, 2021: The JSS College of Arts, Commerce and Science (Autonomous), Ooty Road, Mysuru, is celebrating the 13th Graduates’ Day, on February 19, 2021, Friday, at 10.30 am, at the Golden Jubilee Hall, in the college premises, in the Divine Presence of His Holiness Jagadguru Sri Shivarathri Deshikendra Mahaswamiji. Dr. V.N. Balaji, Founder, Jubilant Biosys Limited, Yeshwanthpur, Bengaluru, will be Chief Guest and he will address the new Graduates. Dr. C.G. Betsurmath, Executive Secretary, JSS Mahavidyapeetha, will preside over the function.
The students of the college who have passed degree and postgraduation examinations in the year 2019-20 are eligible to participate in this programme. A total number of 970 students, including 497 undergraduates, and 473 postgraduates, are expected to take part in this programme. 62 toppers will be honoured on the occasion.
The graduates are informed to register themselves before 9.00 am on 19.02.2021 to attend the function. Invitations have been mailed to all the students.

Kollegal, Feb 9, 2021: “Students should move according to the speed of this competitive world. You should be eager to know new things and technology. You can expect a good result if you focus more on your talent during your student days,” opined Smt. Bhramarambha, Convener, Cultural Forum and Assistant Professor.
She inaugurated the ‘Talent Hunt’ program for the year 2020-21, orgnaised by the Cultural Forum of the JSS Women’s College, Kollegal.
In her addres, she said, “Today Digital India is making sound everywhere and proper usage of the internet is required. Advanced Science and technology instead of helping the students by giving opportunities to expose their talent is concealing it. Today the students have reached a level where they feel there is no life without a mobile phone.” She called upon the students not to forget our scientific and traditional entertainment activities besides adopting advancements.
Prof. Umesh, Principal, JSS Women’s College presided over the program. In his address, he said every student will have some talent. “Such platforms are required for the students to expose their talent. Of course, the students will have the pressure of syllabus and exams. We are just coming out of the pain caused by COVID-19 pandemic and such programs will provide us confidence and relaxation,” he added.
Prof. H.G. Natarajan, Prof. A.P. Mahadevappa and representatives of the cultural student forum, Students Welfare Officer Prof. M. Basavaraju, Class Representatives were present on the dais.
The students had an opportunity to present their talent and skills through dance, singing, debate competitions, speech competition, solo acting, cooking without fire, rangoli competition, and other activities.

Kollegal, Feb. 11, 2021: “People have a lot of strength and potential and they require proper guidance and it is the responsibility of the parents and the teachers to guide them properly,” opined Sri A.P. Mahadevappa, IQAC Convener.

He inaugurated the ‘Abhivinyasa Program’ organised for the first year Degree students of 2020-21 of the JSS Women’s College in Kollegal.

In his address to the students he said, “If parents impart vocational knowledge to their wards, teachers will teach them professional skills. The students should select a subject of their interest and their capacity and try to shape their future on their capabilities without yielding to anybody’s pressure.”

Sri Sampath, Assistant Professor, History Department welcomed all the new students and explained about the various facilities available in the College, and advised the students to utilize the facilities wisely and bring laurels to the College, parents, and society. He also called upon them to become good citizens and become a model for others.

Sri Basavadatta Mahadevaprasad, Assistant Professor, Commerce provided information about the various options available after graduation and he also explained in detail the educational, and extra-curricular facilities provided by the College.

Sri Srinivas, Librarian explained that the library of the JSS Women’s College in Kollegal is one of the best in the entire Chamarajanagara District and also provided detailed information to the students about the information centre, computer lab, E-Resource Centre, and how to use them.

Prof. Umesh, Principal, JSS Women’s College, Kollegal presided over the program. In his address, he said, “If inculcate dedication and interest we can easily achieve anything. He also explained the importance and need for good knowledge in English, general knowledge, current affairs in today’s competitive world. Knowledge will become more meaningful if we have talent and skill. When you select a good college you should also have an interest in shaping a good future.”

Sri A.P. Mahadevappa inaugurating the ‘Abhivinyasa Program’ for the year 2020-21, organised for the new degree students at JSS Women’s College, in Kollegal. Prof. Umesh, Principal and other lecturers are seen in the picture.

Sri Basavadatta Mahadevaprasad delivering a lecture about the program. Prof. Umesh, Principal and others are seen in the picture.

Mysuru: The Development Commissioner (Handlooms), Ministry of Textiles, GOI, in association with JSS Urban Haat, has organized an expo under the title ‘Gandhi Shilp Bazaar,’ at JSS Urban Haat in Mysuru. With the blessings of Jagadguru Sri Shivarathri Deshikendra Mahaswamiji, writer Dr. S.P. Umadevi inaugurated this exhibition-cum-sale of handicrafts, on January 29, 2021. It will be open to the public till 7th February. 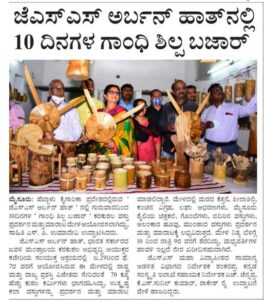 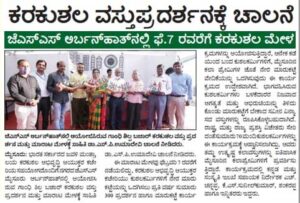