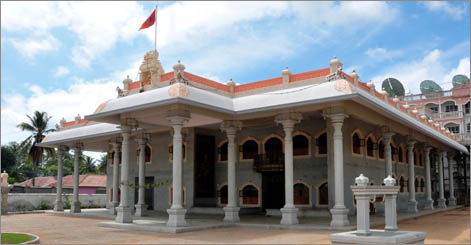 Suttur Math is a pilgrim centre, which has a history of more than a thousand years. The Pontiffs of the Math have devoutly dedicated themselves to the spiritual and educational development of people of all religions and faiths. The Math itself has been a seat of knowledge and wisdom and has worked ceaselessly for human welfare since its inception.

Suttur Jagadguru Sri Veerasimhasan Math can be aptly described as an active ongoing movement that upholds the cause of social and economic justice, based on spiritual ideals, as propagated by the great Shaivaite thinkers. It is no wonder today the Math’s activities and influence has spread far beyond the small region on the banks of the River Kapila in Karnataka and reached communities not merely in other parts of India but in many countries of the world.

For over a thousand years now, Pontiffs of great eminence have led the Math-each one committed to serving society in his own chosen way. This has contributed to the spiritual enrichment of its followers and has helped social and economic uplift. The Math’s growth is a reflection of the social and spiritual progress of its followers, and as such it is more a process than an event.

The Math propagates a religious and spiritual faith that is distinctly known as the Veerashaiva faith. This faith has found expression through the teachings and words of countless saints and seers as well as writers and philosophers. The pure essence of Shiva worship is: ‘tolerance towards all living beings’ and ‘regarding work as the means of worship.’ These are the twin philosophical principles of the Veerashaiva faith which have been instrumental in bringing about reforms of tremendous social significance as initiated by Sri. Basaveshwara in the 12th century.

Sri Suttur Math is today regarded as one of the leading organisations for the continuance of Veerashaivism, disseminating the ideals of universal brotherhood and striving to spread human values and ethics across the world through an array of activities – spiritual, cultural and educational.