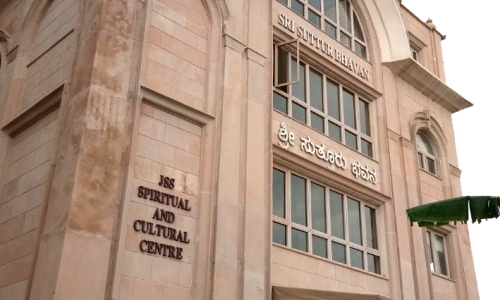 JSS Spiritual and Cultural Centre at Saket, in New Delhi, sponsored by the “Jagadguru Sri Veerasimhasana Samasthana Math ” – popularly known as Sri Suttur Math, Mysuru, is a non-profit organization. The center is established to preserve the rich Indian tradition of arts and culture, besides promoting, peace, harmony and human values amongst all the people. This center is dedicated to promoting the rich tradition, culture, and knowledge gained over thousands of years and recorded in many forms. The center will serve as a guiding force to help people in this part of the country, to understand the true essence of spirituality and to inculcate the values of humanity and religiosity, so as to ‘ enhance the inherent spark’ in their everyday life.

The center has a library, a prayer hall, a community hall to accommodate community events and concerts and meeting rooms to hold seminars and workshops. The center promotes youth activities by organizing camps. Adults and children can participate in various Yoga and Sanskrit classes offered on a regular basis. The center will promote music and dance by inviting famous artists from all over the country and world.

The center welcomes one and all without discrimination to race, religion, national origin and economic status

A centre for learning and sharing, enabling a synergy between spirituality and Indian culture through the collective wisdom of cultures, communication and social change.

Sri Suttur Math, located on the banks of River Kapila in South Karnataka, had not thought of setting up a centre for spiritual activities here; there was no such intention; nor had it imagined a few years ago. Though the centre has come into being! We attribute the successful realization of the Centre to the far-sighted vision of our spiritual teacher, Jagadguru Sri Shivarathri Rajendra Mahaswamiji. Today an awareness of this kind of spirituality is most necessary, and every human being requires it. It is through moral and sincere living that man can feel and enjoy inner happiness. It is the spiritual wealth within the heart of man that enables him to live his daily, routine life efficiently. To bring into meaningful harmony the demands of the work-a-day world and the world of the spirit must be every one’s objective. It is only this which will make the present day world pleasant and non-stressful. The Spiritual and cultural Centre will work in this direction. The centre, in its own humble way proposes to carry on this spiritual endeavour. One of the major objectives of the Spiritual Centre here is to enable people to achieve contentment and mental health. The world we live in has many temptations to offer and we are pulled in different and often in conflicting directions. This centre hopes to offer people caught in this situation, a true, tranquility-inspiring spiritual centre.

‘Religion and spirituality are universal and these should be made available to the needy’.
Jagadguru Sri Shivarathri Deshikendra Mahaswamiji

A non-commercial Centre committed to the opportunity for current and future generations to continue to appreciate traditional notions of spirituality and culture as well as to learn about its various forms through discourses and cultural programs.

A Celebration of Spirituality and Culture

There comes a time in society, when old traditions start fraying away. And if a conscious effort is not made to preserve, re-invent and modify them, the pace of growth swallows up the soul of society. This is the time, where the present generation has to look out for the underpinnings of its spirituality and culture and create spaces, both physical and psychological that will be the selfless uncommercialised crucibles of the evolving traditions and new legends of spirituality, music, art, design, theater, craft and beauty in any form of expression.

Jagadguru Veerasimhasana Peetha at Suttur, which was established in the 11th century at Suttur by Adi Jagadguru Sri Shivarathreeshwara Shivayogi Mahaswamiji, has a history dating back to over 1000 years. It was founded with high ideals and the pontiffs who have succeeded over the centuries have striven to make a contribution in religious, social, educational and economic spheres.

Many Seers of the Sri Suttur Math had chosen different paths, literature, education, healthcare, infrastructure… to better the daily living conditions of those around them. On the other hand, there was a common belief transcending the times they lived in, that bound all of their thoughts and deeds. The belief was simply this-for a society to be selfless, its people had to be in touch with their spirituality. In such a society, ills such as greed, jealousy, hatred, violence, exploitation find no takers. Rather co-existence, harmony, tolerance, and compassion become a way of life.

To achieve this, the past Seers, including the present 24th Seer, His Holiness Sri Shivrathri Deshikendra Mahaswamiji, have been the guiding force in helping people understand the true essence of spirituality and to inculcate the values of humanity and religiosity in their everyday life. Fully aware of the perils of people paying mere lip-service to the idea of spirituality, the Seers chose to teach by example rather than just preaching. They conducted their own lives in such a peerless manner, demonstrating awareness, detachment to materialism and always putting others needs before their own, that they became inspirational figures for the thousands who came to visit them. As a natural progression, the Math began to organize several spiritual programmes, retreats, discourses, and seminars to help people on this inward journey.

Since then, Sri Suttur Math and the JSS Mahavidyapeetha have initiated several spiritual foundations and organizations such as the Sri Shivrathriswara Dharmika Datthi, JSS Spiritual Mission in the USA, Bharatiya Samskruthika Parishat, Gurukuls and Vedic Schools. They are also the founding members of the Foundation of Unity of Religion and Enlightened Citizenship (FUREC). Sri Suttur math has now established the JSS Spiritual and Cultural Centre, to be known as Sri Suttur Bhavan, at New Delhi. The center will serve as a guiding force to help people in this part of the country to understand the true essence of spirituality and to inculcate the values of humanity and religiosity, so as to ‘enhance the inherent spark’ in their everyday life.

The ‘Sri Shivarathreeshwara Dharmika Datti’ was established in 1986, to help children develop overall abilities in academic, spiritual and cultural fields. Started with an endowment of Rs.10 lakh, SSDD’s mission of bringing Dharma to every doorstep is made possible by using the interest accrued from the endowment. Apart from organizing spiritual programmes for the benefit of the society, the Datti publishes books and articles, related to Veerashaiva dharma, Literature, Culture, Arts & History. Every year it awards the best literary works, arranges discourses by various religious heads and organizes general spiritual & personality development camps for all age groups. More focused camps are also conducted for Spiritual Heads, followers of the Suttur Math and the faculty and non-teaching staff of various schools and colleges. Veerashaiva Dharmika sabhas are also organized every year. At this annual event, members of the Veerashaiva community assemble from all over India and there is a stimulating exchange of thoughts, cultural programmes, exhibitions, and display of literary works.

The Math has set up Vedic Schools and Gurukulas (training for religious leaders), in order to facilitate the passing of knowledge present in our spiritual scripts and texts to the next generation. The Gurukulas offer residential educational facilities and students also partake in religious camps. After completion of their studies at the Gurukula, many students pursue ^” higher studies and go on to become pontiffs of different Maths or engage themselves in religious activities of the society. With an effort to bridge the gap between East and West (spiritualism and materialism) Seers from the math have traveled abroad to organize or attend (on invitation) various international workshops, seminars, and conferences on spiritual and contemporary topics.

An all India level initiative started by the Math for providing collective leadership involving all the heads of different religions, the Bharatiya Samskruthika Parishath was established at Chinthana Goshti Samaroh in Ooty. This organisation aims to take up activities, which could benefit mankind with special emphasis on the revival and propagation of the ancient traditions, culture and religious values of India. 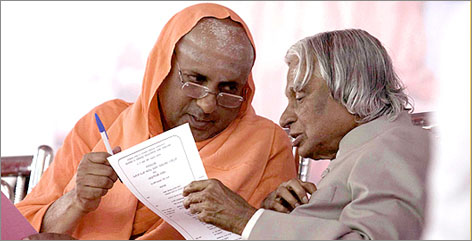 Anticipating a need to carry the rich Indian socio-cultural and spiritual heritage to all the corners of the world, His Holiness Jagadguru Sri Shivarathri Deshikendra Mahaswamiji, the present pontiff of Sri Suttur Math established the JSS Spiritual Mission, in 1999, as an 501 (c)(3) Public Charitable Organisation. Since then the mission, with its 51-acre site in rural Maryland, has been engaged in extending the spiritual and educational activities of the JSS Mahavidyapeetha for the benefit of JSS alumni and NRI devotees in North America. Their activities include focus on religious discourses, the practice of yoga and the dissemination of spiritual knowledge through publication of books and preparation of cassettes and CDs. Furthermore, another purpose of the Mission is to expose North America to the spirituality found within all religions. It also organises lecture tours with His Holiness Sri Siddheshwar Swamiji.

“Apart from spreading spiritualism and bringing together a unity of minds, the JSS Mission should spread the message that in whichever country the Indian population resides, particularly the US, you must always give to that country your best of knowledge, your best work, in everything you do.” The establishment of a JSS Mission in the US is an important step in spreading the value system derived from our civilisational heritage globally, “The economic prosperity of the nation and the value system will enable evolution of an enlightened citizen through an integrated effort of the spiritual system.”

Excerpts from Former President A P J Abdul Kalam’s speech on the anniversary celebrations of the JSS Spiritual Mission, US, in Gaithersburg on 15th October 2007